The curriculum process is at the core of the development of education. In 2010-12, HAMK focused on the development of the module model, study methods, and the national DP reform. The aim was to increase degrees’ workplace relevance and remove curriculum fragmentation. The degrees’ core competences were structured, and the profiling competences defined, and they both were were constructed into workplace-oriented modules of 15 credits. In 2014, all degree programmes started using the modular curricula and team teaching.

The reform of the curriculum process was aligned with the development of ICT systems. The Peppi system was introduced, and it has expanded to include the management of personal study plan work, recognition of prior learning, thesis process, electronic study documents, the graduation process and student feedback. Students have been provided with services independent of time and place, as well as transparency and equality in the management of study processes.

The 2020 curricula were reformed so that they better serve the customers of continuous learning, enable the students to build their personal study paths more smoothly and recognise prior learning. The national Digivision 2030 was considered in the reform.

Developing and establishing the module model

Previously, according to student feedback, there were several starts and ends during the semester, and the assignment deadlines were overlapping. There were overlaps in teaching contents because joint planning was only occasional. The reform begun with ideas of the three education models and the modularity of studies.

The module model has been developed with an experimental approach, renewing processes and operating methods, establishing functional practices and collecting feedback. In the current model, the modules are functional entities with uniform schedules and registration times at the HAMK level. As a rule, students start studying in a new module 4 to 5 times per year. If the student wants and can speed up his/her studies, the changes will be considered in the PSP. The workload of students feels lighter when the common learning assignments and module projects are coherent. As a result of the transition to the module model, student feedback in the Rector’s students’ hearing has improved and the accumulation of credits has improved.

The module model was combined with a necessary reform of the study feedback procedure. Feedback is given by module, with a joint feedback form. The feedback is imported in the BI system, where it accumulates as a basis for the development of education. Employers give feedback by module projects. This has made it smoother to get relevant feedback from the world of work.

The transition to a team-teaching model has reformed teachership

Developing team-teaching is linked to developing the module model and curriculum reform. Instead of individual course responsibilities, teachers were organised to work in teams responsible for planning and implementing a competence-based module. The aim was for teachers to have joint responsibility for guiding students’ learning and assessing their competences, while creating implementations that integrate different subjects and correspond to phenomena in the labour market. From the teachers’ perspective, the change has been significant. Cooperation between teachers increased, which increased their collective ability and resilience, trust in their ability to solve challenges together, and the ability to regulate their own and the team’s activities according to the needs of the students. Although the change has not been easy, the teachers have felt that shared responsibility and collegial cooperation are valuable and improve well-being. The effects of team-teaching are reflected in the personnel’s well-being survey as an increase in the experience of obtaining peer support. 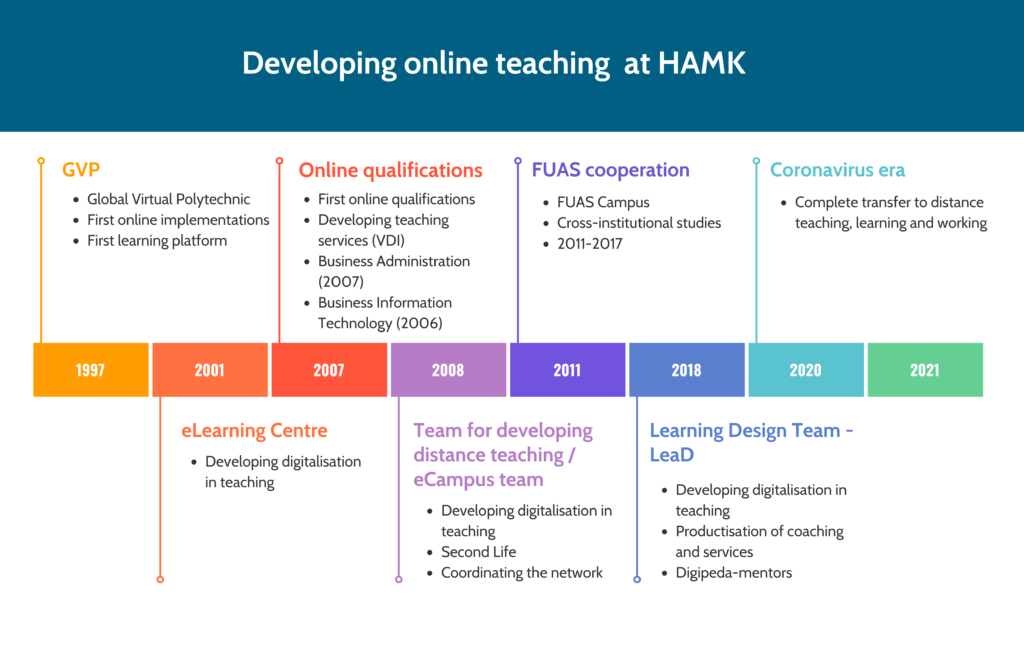 Currently, the development work is facilitated by the LeaD (Learning Design) team, who operates as a network of 25 people in different areas of expertise, with variable shares of working hour. The network covers all schools, research units and support services, encouraging into digital development. The LeaD team has systematically developed facilities, equipment, and instructions, thus facilitating the digitalisation of teaching, learning, and working.

Everyday digital support and coaching is readily available and provided in many ways. Coaching (incl. open badges) is based on national quality criteria for online implementations and accessibility, and implemented and developed on the basis of participant feedback.

HAMK’s digital competence was self-assessed in accordance with the DigCompOrg framework. Based on the self-assessment results, areas of development, milestones and measures were defined and refined, along with the persons in charge and the schedules.